The history of the Secours populaire, a profound change.

Created in 1945, the Secours populaire français is the heir to numerous currents of mutual aid which have marked our country and Europe and as is reflected in its motto: “Everything human is ours” (“Tout ce qui est humain est nôtre”).

Over the years, Secours populaire has considerably changed. Its direction, rules of conduct and language have been renewed with a commitment to draw together people of good will within its ranks regardless of their involvement, political, philosophical or religious sympathies and without any distinction between race, sex, age or social level. The aim is to together show popular solidarity against the consequences of dramas experienced by people either individually or collectively, without commenting on their causes.

A great decentralised movement Secours populaire today includes 98 departmental and professional federations as well as just over 600 committees. This movement allows each person of goodwill to personally invest in the manifestation of solidarity.

Genesis of the movement

In 1926, the International Red Relief was created. He wanted to be the “People’s Red Cross” with a “French section” which attracted the involvement of communists, ant-fascists, famous intellectuals such as Henri Barbusse, Romain Rolland… The association organises support for prisoners and deportees. In this period, it developed social activities aimed at deprived children: holiday resorts, help to children from unemployed families…

The aid activities re-started after the liberation in August 1944 and were targeted as a priority to children and prisoners of war. 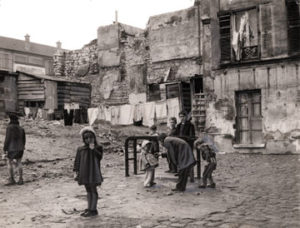 On the 15th of November 1945, the Secours populaire français was born. The association is made up of men and women of goodwill of whom many experienced deportation camps, prisons and the clandestine life during the Second World War. They wish to see in liberated France a large association of “popular solidarity”.
Continuing its work of support to disadvantaged people without any respite, the Secours populaire over the years became one of the main French associations battling against insecurity and exclusion. Its work with children led to the SPF being accredited as a National association of popular education on the 10th of January 1983 and then recognised as a charitable organisation on the 12th of March 1985 and finally in 2000, recognised as a complementary association of public education.
In the meantime the Secours populaire would be named as a Great National cause in 1991, in 1994 with 29 other associations for its activities in the fight against exclusion, in 1996 with other associations for its training activities in the fight against the abuse of children and in 1999 with 10 other associations for its activities to promote the development of a civil consciousness.